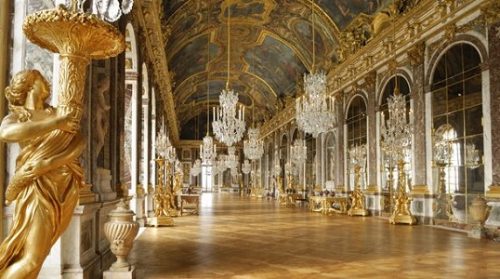 The Versailles’Palace is one of the UNESCO’s World Heritage List. It is very famous, not only for its beauty but also as a symbol of absolute monarchy of the Ancient Regime.

In Domain of Versailles, you can visit these main sights :

See my prefers sights indicated by *

In the 1660s, the young king Louis XIV began to transform the hunting castle of Louis XIII. The architect was Louis Le Vau. André Le Nôtre begans to create « French-style » Gardens of Versailles.

In 1678, Louis XIV, named « Sun King », decided to expand the castle into a Palace. The architect Jules Hardouin-Mansart created the Hall of Mirrors, decoreated by the painter Charles Le Brun. The famous Hall of Mirrors was a waiting and meeting place where the King showed his royal power to impress visitors.

In 1682, the King moved the court and the government of France from Paris to Versailles.

In 1837, Louis-Philippe converted it into a museum of French History.

In Versailles’ Palace , you can see first :

You can also see :

2. Gardens and Park of the Palace

André Le Nôtre created a vast perspective of grasslands and Water Parterre from the front Palace of Versailles.

In these « French-style » Gardens, he put up trees from all the provinces of France, the Canal, fountains and sculptures.

The Grand Canal is the original creation of André Le Nôtre who transformed the east-west perspective into a long expanse of water. It was use to sail and for nautical shows.

The architect Jules Hardouin-Mansart built the Orangerie. Oranges, lemon and pomegranate trees are put indoors during the winter.

In Gardens and Park of Versailles, you can see :

The Grand Trianon was built by the architect Jules Hardouin Mansart in 1687 for Louis XIV. Also named « Marble Trianon », the Trianon Palace is famous for its geometrical French-style Gardens.
Louis XIV occupied the Grand Trianon with his mistress Madame de Montespan. He also housed his sister-in-law and his son-in-law.

In Grand Trianon, you can see :

This estate is totally dedicated to the Queen Marie-Antoinette. The Petit Trianon, the Hamlet and the Gardens reveal Marie-Antoinette’s private life. Louis XVI’s wife loved this place where she could be away from the court of Versailles.

In Marie-Antoinette’s Estate, you can see :

French Mother, fan of art, gives you advice to prepare your best visit to Palace of Versailles.